Can I change this? I’ve googled around, I’ve gone through all the options in “Administer” three times, but I can’t find it. I would really like to have those emails, though, because right now sometimes I don’t check that list for a few days/weeks/months, and people’s problems don’t get solved…

Stop loading the inbox page, get to keep your written stuff

This is JavaScript executing. There’s no stopping it from throwing away your text anymore by returning to the inbox – and what’s worse, the back/forward history is so confused by what’s going on (as you hit escape) that it won’t be able to take you back to the reply page and restore your message to the textbox (as back/forward generally does in Firefox). Congrats, you just lost N minutes worth of typing, and who knows what kind of brilliant ideas!

Question to the Lazyweb: whose fault is this? Can it be fixed? How? (Yes, I’d prefer to just use email all the time, too, but unfortunately that’s not always an option, and I’m sure there are webmail implementations which have similar problems, especially once you turn off automatic draft saving)

So most eyes these days seem to be firmly focused on that other operating system release, but I want to talk about Gutsy for a bit. A few nights ago I updated my machine to it, and there are quite a few new problems, and also quite a few old ones that are still not fixed.

Update 2007-10-31: Most of the below is now fixed. For explanations, see the comments at the bottom of this post.

All in all this means I really don’t want to use Ubuntu anymore, as it’s downright painful to get anything done (without access to my windows partitions, most of my documents, patches, photos and other personal things are out of reach, and with my computer busy with some invisible SomeThing, getting other work done becomes painfully slow, too). Solutions appreciated. 🙁

I would be most interested in any (semi-)official documentation on this particular icon overlay, and when it is used by Mac OS X. I was unable to unearth anything – possibly because I don’t know what to look for. 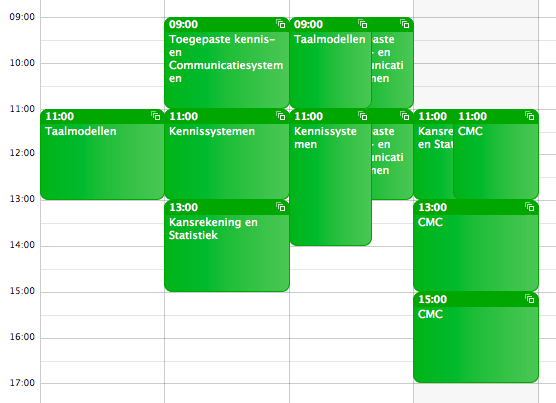 I’m not sure who made this joke up, but it’s not funny. I already blew at least one of the courses I had the first part of this semester (because thanks to United Airlines I missed the exam), and now the schedulers have been conspiring to make me fail more of them this part of the semester. Oh, and I don’t know if this is just me, but there’s this day called “Friday”, which you can actually USE if you’re having trouble scheduling…

That will do for now. I’m off to see the Queen Mary.

One more thing – it amazes me, as it has for some time now, that as one travels to different places across the globe, every place has its own “colour scheme”. The easiest examples close to my home are the fact that brick houses make up most of the (nothern/middle) Netherlands, and once you cross the border to Belgium and France, the omnipresent red brickwork is replaced with grey/white plasterwork, the colours and fonts used on roadsigns change, the wildlife/trees are different… For some reason this and the different plants/nature/cars around mean the atmosphere changes. Perhaps this is what other people think “feeling on holiday” is all about, I’m not sure. I just find myself thinking, at times “gosh, this place is ugly” and then remembering I should really be thinking “gosh, this place is different“.